The Day All Android Developers Will Use Kotlin

Advantages, statistics and my own experience

The day of the Google I/O 2017 was probably the highlight of every Android developer who has already had a taste for Kotlin. Finally, Kotlin is a fully supported programming language for Android. Directly integrated into Android Studio 3.0.

And with every day, there will be more Android developers who rewrite their apps from Java to Kotlin or who simply rely on Kotlin for new projects. Why not, Kotlin offers so many advantages:

Eventually the day will come when the last Android developer will switch to Kotlin. Just because he realized that using Kotlin makes life so much easier. Even Google will eventually upgrade Kotlin as THE Android programming language and Java will disappear more and more from our perception. 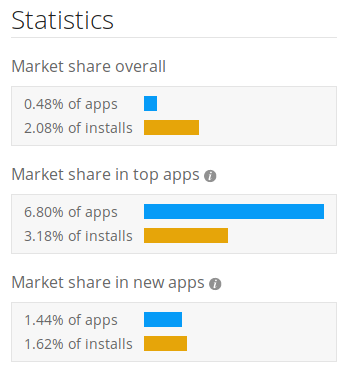 According to AppBrain, Kotlin is already represented in about 0.48% of all apps on Google Play and 2.08% of all app downloads are apps that use Kotlin. The top apps look even better. There, 6.80% of all apps use Kotlin. Among the top apps with Kotlin are also some well-known ones, such as Twitter, Pinterest or Netflix. That may sound a little bit small in itself, but considering that there are currently almost 3.4 million apps on Google Play, this is not so little.

But not only the bare figures are an indicator that Kotlin is gaining momentum. Especially in the Android environment it is always important for developers to keep up with the times. New design languages, frameworks or even programming languages may be implemented quickly, so that the app doesn’t seem to be from the last decade.

My personal experience with Kotlin began at the beginning of 2016, when Kotlin was released in version 1.0 after many years of development. I had read about it on a tech blog and what was written there made me curious. Compatible with Java? Java and Kotlin code in a project? No more NullPointerExceptions? That sounded like heaven on earth to me.

I had to try this right away. I was just working on an app and what better to do than try something new. So I followed the instructions I found on the official pages, installed the Kotlin plugin in IDEA (which I used as an IDE) and started to automatically convert some simple classes.

Of course, not everything worked out right away, but according to the trial-error-principle I learned the basics step by step by trying and it was even fun. The code was suddenly so much shorter and it needed much less null checks. Again and again, other nice features could be found, which raised the enthusiasm repeatedly.

At some point, I had completely converted the app to Kotin and started to rewrite my other apps. That’s how it all started.

Today I almost only use Kotlin in my apps and when I have to write Java it is not uncommon for me to forget semicolons out of habit. It’s that fast…

Resources for every Kotlin developer

Here are some of the top resources that can be helpful for any Kotlin developer: