Published on 2017-05-14 in Medium Archive
Short link: https://b.jlel.se/s/321
Share onlineA ⇄ 文
⚠️ This entry is already over one year old. It may no longer be up to date. Opinions may have changed.

I used my boredom to create something, that fulfills me

I always tell people, I like programming and how much I’m excited about doing great things with code and improving the world through doing so.

There’s nothing wrong with this so far, but I got stuck somewhere. I was used to code Android apps during my spare free time and I was really into this hobby. But people change and I changed too. Not that I don’t like Android programming anymore, but I like to try new things. Expanding my horizon, improving my skills, learning new things.

So while starting projects, giving up project and throwing them away, I eventually ended up creating a website called “Lost Myself”. The name illustrates my situation pretty well. I got lost in the jungle of things I could do, but didn’t found something that I do.

I registered the domain and started a first version at the end of last year. My idea was to create something like a more modern version of Yahoo. A simple list with a lot of links to websites, that may take someone out of being lost in the internet. I added a couple of websites and funny descriptions to this list and made some cool things with Twitter Bootstrap and jQuery. So you were able to explore different categories and also search, while the the list filters out every non-fitting entry in real time directly on your computer.

I didn’t care much about the programming and I also ended up adding a JSON string directly into my MySQL database, which could then be read and outputted by a one-line PHP file.

After I realized how dump the idea, to just list all the website with my (partly) funny descriptions and comments was, I thought about a different approach to help people getting out of the lost-state. Because people are lazy, they don’t want to read through a whole list of websites. They don’t want to pick an entry. So the idea of showing a single random entry was born.

I again used Bootstrap, PHP and MySQL to output a page with a random entry when you visit it in your browser. The page shows you the title, my comment on this site and two options to either open the site or loading a new one. So you could click till you find a site, which may help you being not bored anymore.

Just some days ago, Unsplash announced, their API is now rate limit free, so you can do almost anything with it. And due to my excitement about this and the fact that I was bored a bit, I though about, why not make my Lost Myself page a bit more visually appealing. So I took the good old Bootstrap PHP file and added a random image from Unsplash to the background with a few lines of CSS. Worked good so far.

But the site’s design sucked though. It wasn’t mobile friendly and reloading the whole page, just to show a new entry was kind of dumb. High server load, slow loading times and unsatisfied visitors.

So I changed a few things. First I needed a simple API, which I can request and it responds with a simple and short JSON string containing the information about the entry. Title, description and so on. And I needed a better design.

It was simple to code the API, after I found out, that I can easily create objects and print them out as JSON in PHP with just a few lines of code (I’m kind of beginner in this field). Also the front end part was quite simple to create, after I realized how great Materialize is. A really recommendable framework. After that I putted everything together using jQuery to do the API request and manipulating the DOM to show the information after that.

Thanks to some nice people on Twitter, I got some feedback and improved the page on a few different things. I also ended up adding comments (using Disqus) for every entry, so you can share your opinion or add some funny words. 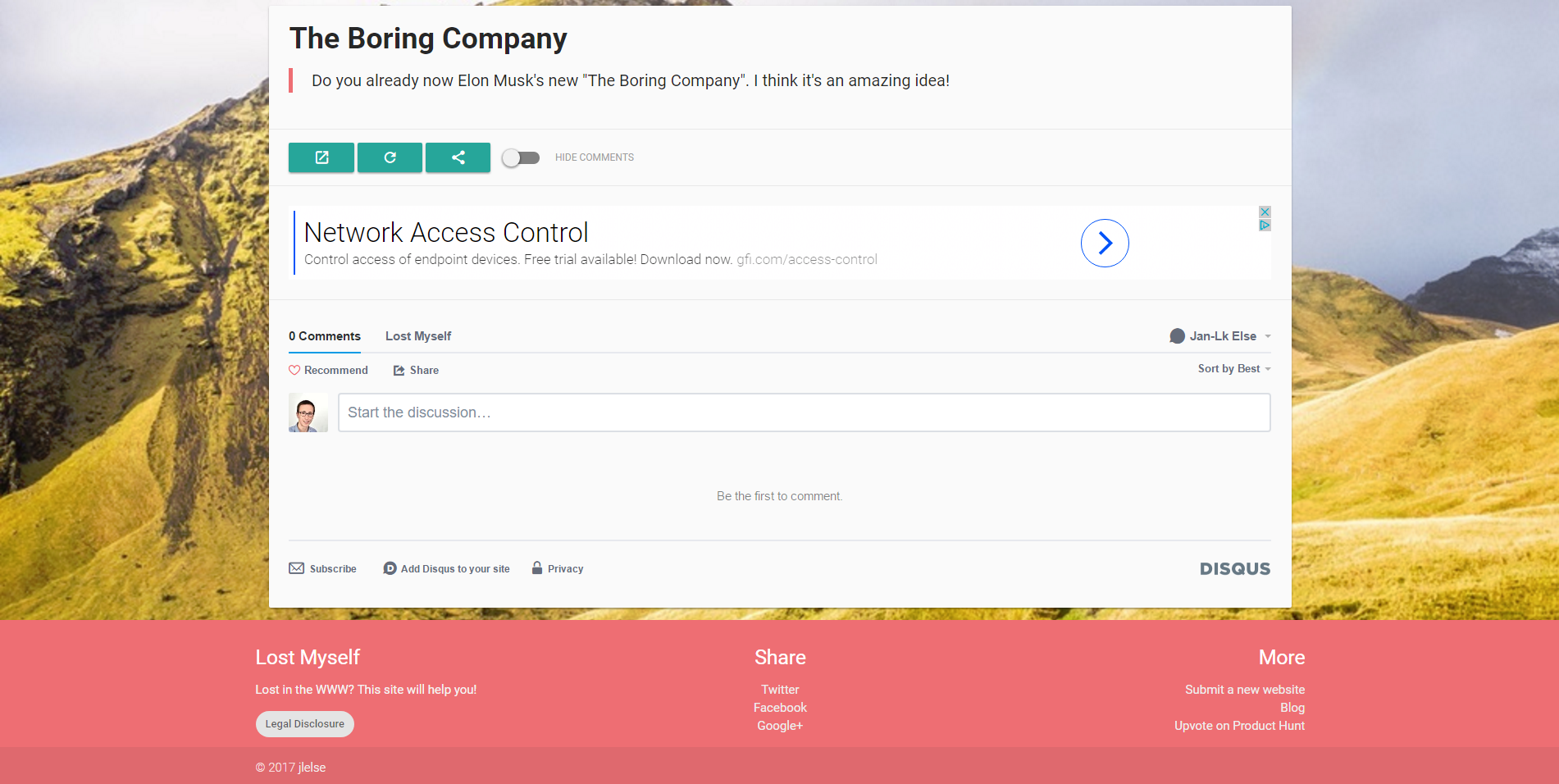 I learned a lot from re-coding the site from scratch. First, that I can turn a stupid side project into something more exciting. Second, that I can combine programming (and learning new things) with creativity: People told me, that they liked my descriptions for the websites. Third, that it’s always worth to expand your horizon and trying new things, even if you end up thinking you wasted your time. Even a failed try is a worth try, because it made you a bit wiser and more experienced.